MONROE, CT — Chris Gueli took in the sites of the rugged coastline and wide open views of Carmel Bay, while golfing on the well-manicured greens of the famous Pebble Beach Golf Links in California. Behind him, patrons of The Players Club at Whitney Farms Golf Course in Monroe chatted with friends over drinks at the bar.

The breathtaking views of the famous golf course appeared on the giant screen of a Trackman Golf Simulator. The Stone Barn’s new sports bar has two of the virtual machines. 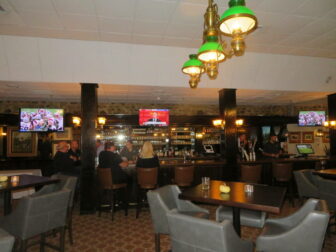 “It feels great,” Gueli said of the video game ball’s realistic reaction to his golf swing. “Playing in Connecticut, this is the closest we’re going to get to this golf course.”

Jim Bargas, owner of Whitney Farms Golf Course, said the simulators are top of the line, allowing players to golf at 150 famous golf courses around the world.

On Friday evening, sports telecasts aired from three overhead TVs behind the bar in the spacious room, which has tables and a circle of comfy chairs by the fireplace.

“This used to be the Fireplace Room at The Stone Barn,” Bargas said. “It was only for catering. Now it’s going to be The Players Club lounge with a sports theme.”

Bargas said The Players Club is a place for people to relax with family and friends over drinks and a grill menu with fare like burgers, steaks and wings.

“We’ll have a wine list and specialty drinks,” he said. “In the winter we’ll have the fireplace going.” 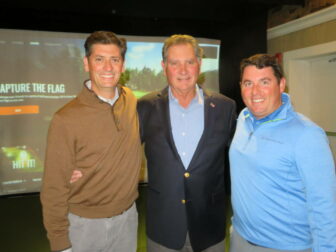 The Whitney Farms Golf Course and The Stone Barn at 175 Shelton Road is a family business started by Bargas and his late father, Chris. They started the golf course in 1979 and opened the business in 1982. Bargas now runs it with his son, Chris.

The Players Club is open from 10 a.m. until 10 p.m., seven days a week. The Trackman Golf Simulators can be reserved online for $50 an hour for up to four players. The rate is per hour, not per player.

“We’ll have a full service restaurant upstairs,” Bargas said, “and we will have The Players Club lounge with the bar and simulators here.”

Bargas had a soft opening for The Club, but last Friday evening the Monroe Chamber of Commerce threw an official grand opening event with a ribbon cutting ceremony to celebrate the new business. 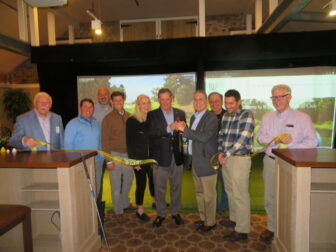 Jim Bargas and First Selectman Ken Kellogg, center, cut the ribbon during the grand opening of The Players Club at Whitney Farms Golf Course. The Monroe Chamber of Commerce organized the event, which was attended by State Rep. Tony Scott, R-112th.

“This is a great new addition to your business,” said First Selectman Ken Kellogg, who joined Bargas in cutting the ribbon with a giant pair of scissors. “We couldn’t be happier to have it here and we wish you continued success.”

Monroe Chamber President Ray Giovanni, who also serves as chairman of the Monroe Economic Development Commission, said The Players Club brings a new dimension to what the town’s business community has to offer.

Giovanni said The Players Club offers a place for the community to come together and socialize and enjoy a recreational activity in a safe environment. He also praised the Bargas family for its success in running a small business in town for so many years.

State Rep. Tony Scott, R-112th, was also among the local dignitaries who attended the grand opening. 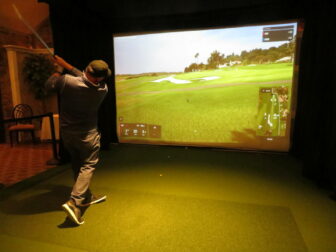 Eric Stockman tees off at the Pebble Beach Golf Links on a Trackman Golf Simulator at The Players Club at Whitney Farms Golf Course, 175 Shelton Road.

On Friday, Whitney Farms’s Men’s Golf Club members and its regular golfers were invited to try The Players Club’s golf simulators for free. The simulators can be used for practice and training, to master your golf swing and for beginners to learn the game.

Bargas said a league has already been formed, so golfers will be tuned up for the spring. The machines can also be reserved for weekly foursomes.

The simulators are made to measure the distance the ball will travel based upon a golf swing, as well as tracking the ball’s spin, speed and trajectory.

“The data, ball speed and how far it will go is 100 percent accurate,” said Bill Street, the golf pro at Whitney Farms. “A lot of guys say they have a 300 yard drive, but it only goes 260,” he added with a chuckle. 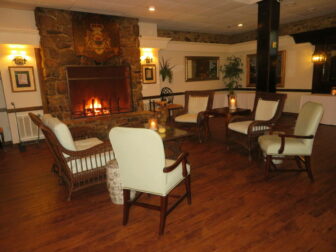 The Players Club at Whitney Farms Golf Course opened in what used to be The Fireplace Room at The Stone Barn.

The Players Club can be reserved for special events, including holiday parties, stags, bachelorette parties, birthdays and corporate events. Bargas said reservations are already being made.

“This is a great way to keep swinging throughout the winter,” Gueli said. “But there is also a great social aspect. You can bring your wife and kids, even if you’re not playing. It has a great atmosphere. You have the fireplace.”

For information on pricing and booking, visit Whitney Farms’s website at whitneyfarmsgc.com.

Why Martinique is an emerging tourist destination?